Closer than you think!

Port of Hvide Sande has a lot to offer!

Port of Hvide Sande is a modern port that can offer all the facilities and services any ship might need. For port-related questions, please contact the port attendant in Hvide Sande on tel. +45 97 31 16 33.

Port of Hvide Sande was built in connection with the establishment of the sluiceway and the lock chamber. A controlled flow of water being routed in/out of the locks gives the port the advantage of Hvide Sande remaining ice-free all year, and therefore being able to be used all year round. The inflow and outflow of water ensures the drainage of Ringkøbing Fjord, in addition to controlling the salt content of the fjord. The port was inaugurated in August 1931 as an active fishing port that grew rapidly. Since then, in the years 1970–1985, major extensions and renovations of the port have taken place. From 2002 to 2008, major investments were made to modernise the unloading- and auction facilities for consumer fish. In the period from 2010 until now, in addition to fishing, the port has focused on transport and services – primarily for the wind industry. 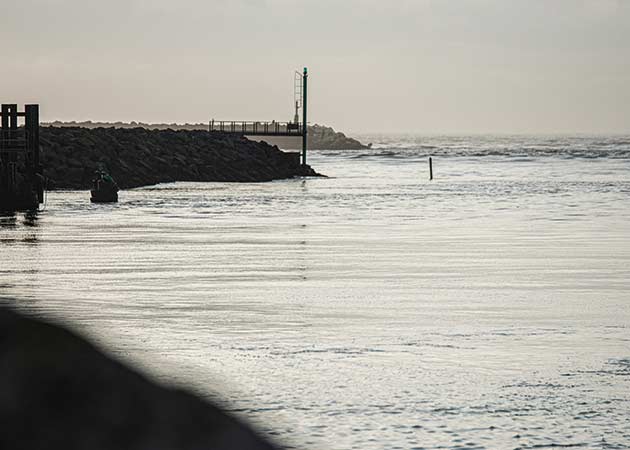 From May 2011 to June 2013, the Port of Hvide Sande’s pier and port facilities underwent a major expansion This means that the port now has a new south pier that is approx. 700 metres long as well as an extended north pier, providing a better and safer entrance to the port. In addition to this, Hvide Sande now has a West Port with very good load capacity, a large available area in connection with the port area, and an aimed-for water depth of 7.0 metres.

The entrance is 7.0 metres deep, just as the depth is 7.0 metres at the West Port. The port’s sand pumps and surveying vessel work continuously to ensure the promised water depth. Questions regarding the sailing conditions, as well as the water depth around the various port sections, can be directed to the port attendant in Hvide Sande on tel. +45 97 31 16 33.

The port is constantly working to improve the entry conditions to the port. Among other measures, a current buoy has been laid out and the lighting of the outer ends of the pier has been improved. 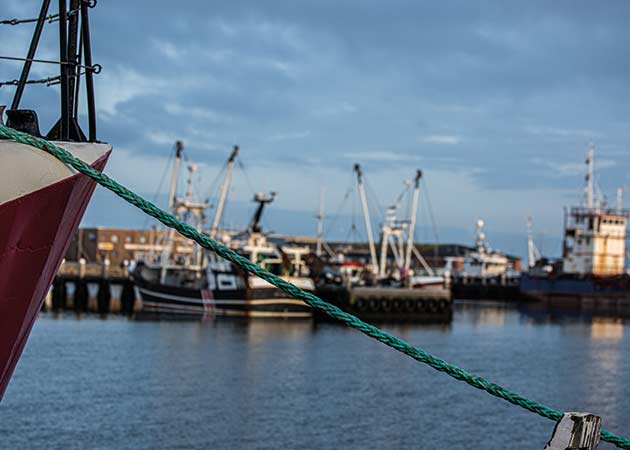 The port attendant in Hvide Sande regularly sounds the entrance to the port. The latest sounding plan can be found here: https://hvidesandehavn.dk/om-havnen/pejleplan/

Load capacity of the docks

The North Port’s industrial docks have a load capacity of approx. 1.5 tonnes/m2. In August 2011, after performing calculations, lifting of a 182-tonne machine was approved. This went well. A crane with an estimated load per support leg of 15 tonnes was used.

Contact the port attendant in Hvide Sande on tel. +45 97 31 16 33, if you are in doubt as to whether something is too heavy. We are always willing to help calculate load capacity and refer you to areas of the docks that can handle heavy loads. 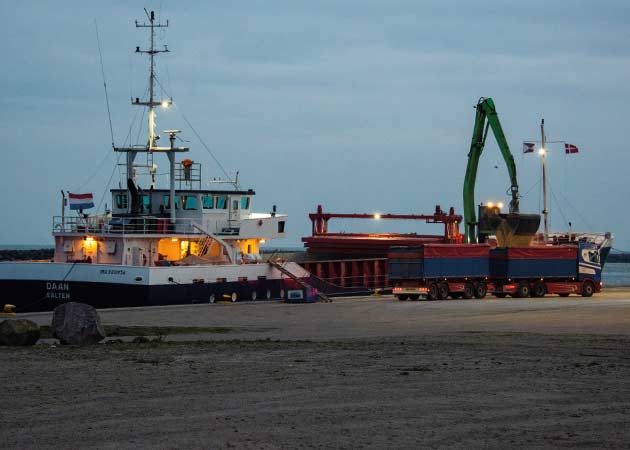 The storage area at the West Port is approx. 22,000 m2. The west quay, with its quay street, is 210 metres long and approx. 35 metres wide. I.e. the new quay street is approx. 7,000 m2 with solid pavement. This is in addition to the storage space of approx. 50,000 m2, which borders the West Port. Furthermore, the port has significant areas available that can also be used for storage. In May 2021, a 2,000 m2 warehouse will enter use, primarily for bulk products such as sand, feed, biofuels and the like. The warehouse will not be heated.

Other information about the lock chamber, berths, shore power, fresh water and facilities for yachting enthusiasts can be found via the following link: www.hvidesandehavn.dk

Hvide Sande Supply is the town’s local stevedore company. Hvide Sande Supply can be contacted regarding crane, stevedores and agent tasks. Their co-owner, Baltic Shipping Company A/S, has a larger fleet of vessels and can offer all kinds of transport tasks, both on land and at sea. Among other things, the sister company Hvide Sande Shipyard has an 80 tonne mobile crane for project goods as well as a Sennebogen crane for loading and unloading bulk goods in particular.

Call or write to us if you have questions about the above or if there are other things we can help you with.

At Hvide Sande, we appreciate the jobs we get. Flexibility and good service are key words for our group.